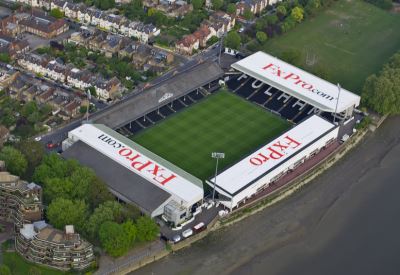 Getting to the ground
The normal way of getting to Craven Cottage is by tube to Putney Bridge, which is about a 15 minute walk from the ground. It takes just over 30 minutes from Kings Cross. You can catch either the Piccadilly Line to Earls Court or the Victoria line to Victoria, in each case changing to the District Line. Coming back you jump on the first train that pulls into Putney Bridge. If it's going to Edgware Road you change there for Kings Cross, otherwise you change at Earls Court or Victoria (horses for courses). The cheapest way of doing it is with an Oyster Card or contactless credit/debit card. Without one it'll cost you roughly twice as much.

An alternative to the above is to go via Waterloo (Victoria Line from Kings Cross, change at Oxford Circus to Bakerloo Line). There are 10 trains an hour from Waterloo to Putney, which is on the other side of the river from Putney Bridge. This option is more expensive than Putney Bridge though.

If you're mad enough to be driving down then be warned that parking in many of the streets around the ground is restricted to one hour on match days. The affected area is indicated on the pub map below. In view of this a sensible move could be to park somewhere near the The Crabtree.

Pubs
A lot of the pubs around the ground are supposedly home fans only. I'm not sure which pubs this refers to though because there aren't really any pubs anywhere near the ground! If you arrive at Putney Bridge then an obvious place to head for is the Eight Bells, just round the corner. This is more or less a designated away fans pub these days. It will therefore get chocka, and you might fancy trying somewhere else, in which case the Kings Arms and Temperance are not far away, or you could carry on straight past these two to the Golden Lion. It's a good 10 minute walk from all of these pubs to the ground. Better again though are the pubs over the other side of the river. It's obviously even further from here to the ground, but the pubs will be a quieter, and the time saved waiting to get served will more than make up for the extra few minutes walk to the ground. The Bricklayers Arms is a real ale pub which has won many awards and is the only pub in  London to serve the full range of seven Timmy Taylor beers. They also have another five beers on! It will get very busy approaching kick-off though, and you may have to drink from the dreaded plastic glasses, so you may prefer the Rocket. This a Wetherspoons outlet, and therefore it is much cheaper than the surrounding pubs. It doesn't serve alcohol until 12 on Sundays mind! Next door to the Rocket is the Boathouse, which is a Youngs pub. If you arrive at Putney station from Waterloo then there's the Railway, another Wetherspoons, right outside the door. Over the road is the Fox and Hounds, which is a Wetherspoons clone and therefore relatively cheap. Then a short way up the road towards the river is the Spotted Horse. If you drive there and end up parking north of the ground then you could give the Crabtree a try.

All the pubs mentioned get decent reviews and are marked on the pub map below.